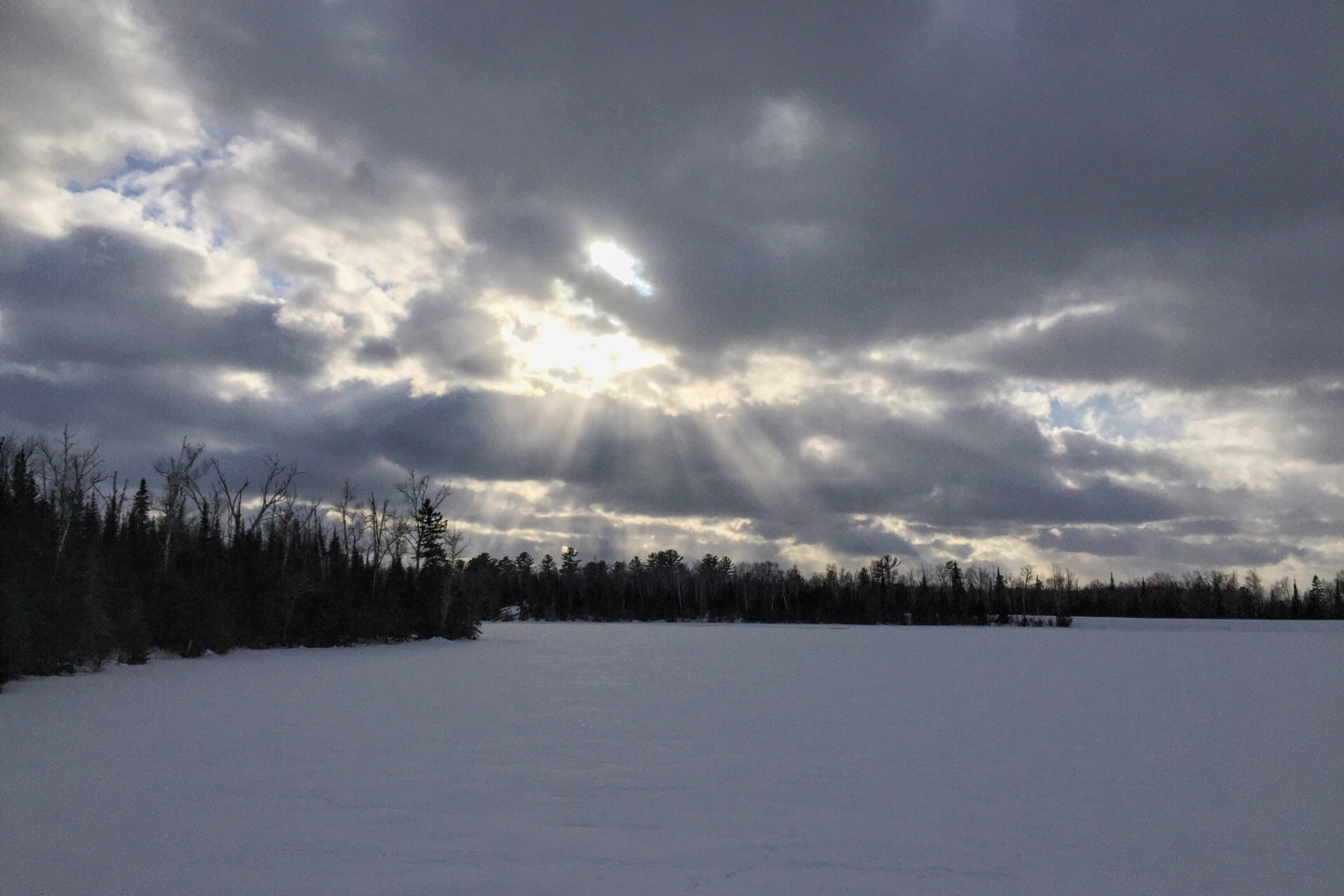 Luke planned a weekend getaway “Up North” to take my mind off of losing my Dad. We have a soft spot for going to the least likely places – Key West in August, the Canadian border in February – in the pursuit of “terrible fun.”

Like 99% of our travel, we set forth with a loose semblance of a plan. Our itinerary included two items: spend Friday night in Duluth and Saturday night in Ely.

Duluth is a charmingly rugged town about two hours north of Minneapolis. Luke booked a hotel with an outdoor hot tub overlooking the harbor, because, man, I just love a good hot tub.

Ely is the gateway to the Boundary Waters Canoe Area two hours north of Duluth. If you’re lucky, it’s a great spot to catch the northern lights. We were rolling into town with a new moon and 30% chance of a geomagnetic storm.

I looked forward to sitting in that hot tub and (possibly! hopefully!) seeing northern lights all week. Beyond that, I didn’t care what we did with our time. We packed our snowshoes, skis and swimsuits into the back of the 4-Runner and headed north, ready for anything.

We arrived in Duluth shortly before 7pm. After checking in and dropping off our bags, we headed downstairs to scope out the hot tub. Normally, you can follow the pungent smell of chlorine from the lobby to the pool. In this instance, we followed the sound of screaming, splashing children. They were darting between the indoor pool and the outdoor hot tub, forming an icy path that would eventually claim the toenail of a guy who decided to let it bleed out in the hot tub.

Luke and I decided to wait until their bedtime at Vikre Distilling. We returned a few hours later to a nearly deserted hot tub, so we hurried up and changed into our suits, boots and winter hats. We wrapped paper-thin pool towels around our bodies and avoided eye contact with those seated in the bar as we hustled past.

We had just settled into the water and cracked our first beers when an icy blast of wind hit us square in the face, freezing any exposed wet hair. We sank lower in the lukewarm water. The heater, cranked up to high, struggled to keep up with the sub-zero wind swirling around inside the glass windbreak.

Nearly everyone in the hot tub was from the Twin Cities, therefore, we were all used to frigid wind chills. However, this wind came straight off of Lake Superior, which is an entirely different dimension of cold. We laughed it off and chalked it up to the idea that any hot tub is better than no hot tub. Even when the tub’s not all that hot.

Before long, it was 11:00 p.m. – hot tub closing time – and the pool boy was politely kicking us out. We wrapped the now sopping wet towels back around our bodies and dripped water all the way back to the room.

Sometime around 3am, I woke up to the strong smell of perfume. I sniffed the sheets around my neck and the scent was overwhelming. I tried to rationalize that perhaps it was the soap I used in the shower, so I got up and gave it a sniff.

No dice. The realization that the sheets hadn’t been changed since the last guest checked out settled in heavily. I was now snuggled up with her possible bed bugs and skin diseases.

I lodged a formal complaint in the morning and hotel management refunded us $24.40 for our trouble, which was telling. Most people’s trouble is worth at least $48.80.

We got to Ely mid-morning and spent the day putting our winter gear to the test snowshoeing on frozen Lake Vermillion, hiking to frozen Kawishiwi Falls and walking around frozen downtown Ely. These places will be packed when summer rolls around, but we saw more birds than people.

Before sunset, Luke scouted out a perfect location for viewing northern lights, should they happen later that evening. The day’s thick cloud cover had broken up before sunset, so we had a good shot.

We drove down a pitch-black country highway toward Tofte Lake as the first stars were appearing in the sky. Luke was silent and intently focused on the road ahead. I looked over at him and asked, “what’s up?”

Without taking his eyes off the road, he said in his most serious voice, “Stay in the woods, you shiny-eyed bastards.” That was the first belly laugh I’ve had in a long time. It still makes me laugh every time I think about it.

Fifteen minutes later, we arrived at a north-facing shoreline, but a milky white haze had crept in, obscuring all but the brightest stars.

A few minutes into it, we admitted defeat and drove back to the hotel. Along the way, we passed another overlook and pulled over juuuust in case there were northern lights to be seen after all. I stepped out of the car and saw, for a single moment, a billion stars shining through an open patch of sky. It was beautiful and vast and worth the effort it took to get out here.

Things don’t always go as planned. I had a wind burned face, slept in someone else’s funk and was standing in the middle of the forest, staring at a bank of clouds. My initial reaction was to be frustrated by these perceived disappointments. But seeing that tiny patch of open sky reminded me of a truth Luke and I discovered long ago in both our travels and in life: unraveled plans bring uncertainty to a journey, not total derailment.

I didn’t expect Dad to pass away at 67. I hoped to have 10 or 15 more years with him. Losing him has thrown me into a state of shock that leaves me feeling really sad or really numb. Every day is different and I’m doing my best to ride the wave of uncertainty regarding how this will affect me in the future.

However, there are moments of beauty mixed into the chaos that covertly reveal themselves to me. This experience has brought my family even closer together. Friends, near and far, old and new, have shown more love to us than I presently know what to do with. And it’s my hope that learning a tough life lesson sucks right now, but will ultimately make me a better person.

Losing my Dad has been one of my biggest fears since the idea first presented itself in the form of a freak brain infection 10 years ago. Incredibly, that fear has now been realized, yet here I am, standing on my own two feet. It hasn’t ruined me like I thought it would. So if that’s the case, what have I held myself back from due to lesser fears?

That’s a thought as big as the clear night sky.