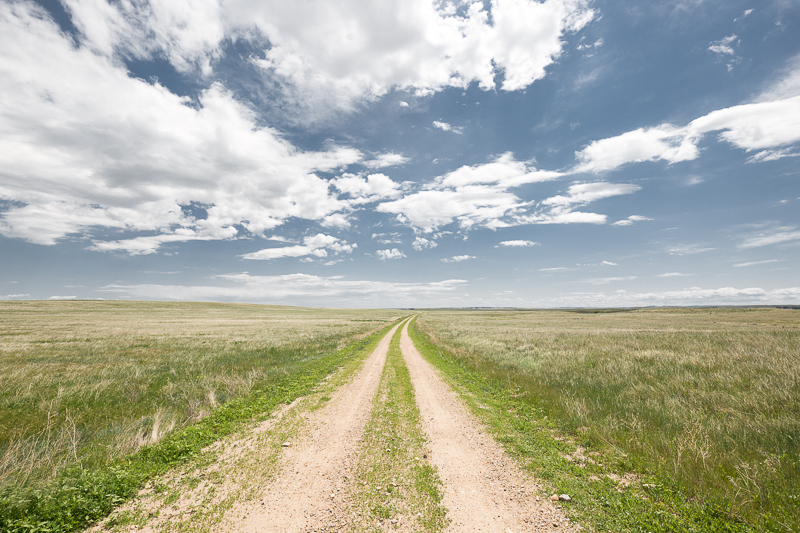 It’s difficult to feel wild and free while snaking behind a caravan of slow-moving RV’s. I relearn this lesson every time I visit a national park in the summertime. Yet, the appeal of trading a crowded city life for wide-open spaces was strong enough to lure me from my home in Minneapolis to Badlands National Park over a recent holiday weekend.

This time, my husband Luke and I arrived with a plan and set our sights on some lesser-known areas, including the park’s Stronghold Unit and the Buffalo Gap National Grassland that surrounds it. Here, it’s possible to hike and camp in complete solitude, even during one of the busiest weekends of the year.

Before entering Badlands National Park, we stopped in the city of Wall to speak with a ranger at the National Grasslands Visitor Center. She showed us a map of Buffalo Gap and recommended a few of her favorite camping spots around Indian Creek, near the ghost town of Scenic between the northern and southern sections of the park.

We headed south from Wall to the Pinnacles Entrance of Badlands National Park and followed Sage Creek Road through the western portion of the park and south to Scenic. Indian Creek Road runs west out of Scenic and into Buffalo Gap National Grassland. The road terminates at a rim overlooking an unnamed valley (potential campsite #1) and continues on as Forest Service Road 7129, denoted by a small stake in the ground.

There are no entrance fees or permits required to camp in Buffalo Gap, but a high-clearance 4WD vehicle came in handy when navigating the area’s “roads,” which are often two-track trails carved into the prairie.

We descended 7129’s narrow switchback into a valley of rolling green hills lining Indian Creek (potential campsite #2). About a half-mile in, we came to a precarious water crossing. I waded into the rushing creek to test its depth. The fast-moving, milky brown water touched the bottom of my shorts while my feet sank into thick, sticky mud. We decided to not push our luck and made camp a short distance from the road.

Buffalo Gap gave us the freedom to choose our own adventure. There are no trails to share and no people to share them with. We spent the day hiking through shin-deep grass that rambles around the stream, through patches of trees and over a series of tall hills. We paused at the top of one to watch strong winds whip fat cumulous clouds across a massive blue sky, then spontaneously burst into light rain.

At sunset, we climbed up the hill next to our campsite and watched the valley below shift from green to rose gold. We listened to the sweetest birdsong and a chorus of crickets fade into the cackle of coyotes and the throaty moans of bison roaming nearby. The sun settled into a blood red horizon. In the far distance, I could see the sharp outline of the Black Hills. 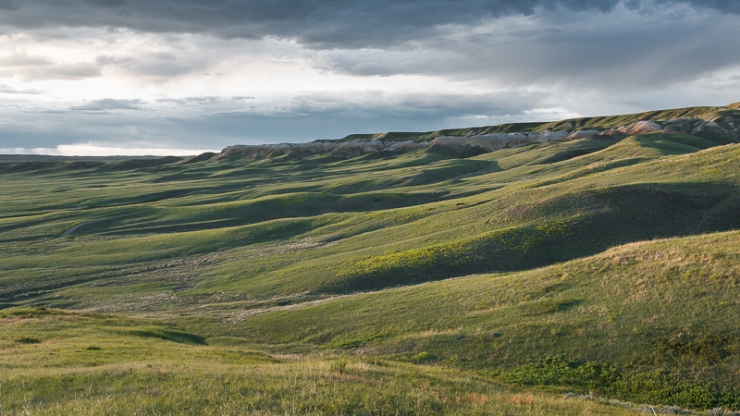 The next morning, we followed Indian Creek Road east to Bombing Range Road, then traveled south into the Stronghold Unit of the park. Along the way, we watched the landscape morph from rolling green hills to a dusty, sunbaked layer cake so familiar to the Badlands.

We turned onto Sheep Mountain Road and followed it for roughly five miles through flat terrain, then up a steep climb to the top of its namesake mesa. Here, we found vast grassland that dropped dramatically into an expansive valley of imposing, yet fragile formations. We spent the morning skirting the rim on a decidedly rougher version of Sheep Mountain Road, pulling over often to obsess over the birds-eye view of Bryce Canyon-like spires and an endless prairie that runs straight into the horizon. 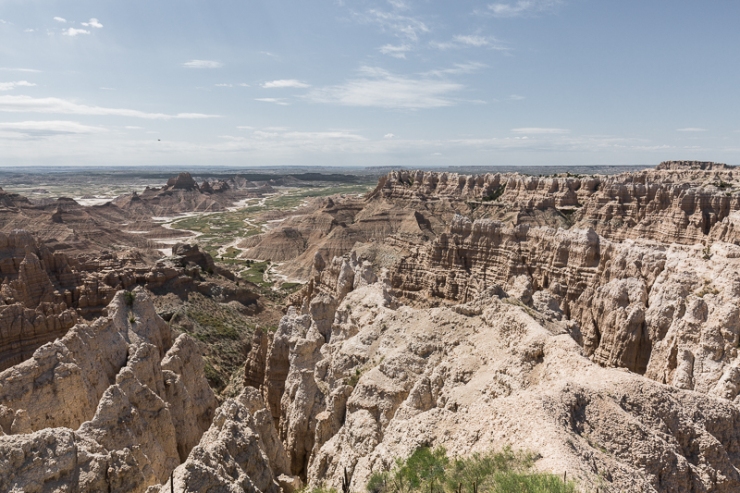 When we headed back down from Sheep Mountain Table, we found ourselves on the surface of an alien planet covered in miniature toadstools. These quirky features form when harder rock sits on top of softer rock, providing an umbrella of protection against the eroding effects of rain. What’s left behind is a field of formations that resemble a cartoon depiction of toadstool mushrooms.

The remainder of our time was spent driving down obscure park and forest service roads along Big Foot Trail and Highway 44 near the Conata Basin simply to see what was around the bend. Our explorations were deterred only by the limited ground clearance of our 4Runner, a grazing herd of bison spooked by a stalking gray wolf, and a pair of surly badgers unwilling to yield the right-of-way.

By the end of the weekend, a fine layer of dust coated everything from the car’s interior to my contact lenses. We hadn’t properly washed our hands for two days and had relied on wet wipes and dry shampoo to maintain our humanity. But we saw more animals than people, so it didn’t really matter.

As published on Midwest Living (http://www.midwestliving.com)