“The southern section of Grand Staircase-Escalante National Monument is a wild and vast frontier, a place that demands dependence on self. Sculpted by wind, water and time, this region safeguards opportunities for solitude and personal discovery amidst a landscape of scientific wonder.”

During our recent trip to Utah, Luke and I marveled at the scope and solitude of Grand Staircase-Escalante. It’s the largest national monument at 1.8 million acres, but gets overshadowed by some nearby attention hogs, including the Grand Canyon, Bryce, Zion and Lake Powell. In the GSE, even the well-known, easily accessible natural attractions rarely attract much of a crowd.

One such place houses a collection of a dozen or so mushroom-shaped rock formations known as the Toadstools. According to the Kanab Bureau of Land Management, these “silent sentinels” are petrified sand dunes that have been formed into hoodoos thanks to the hard Dakota rock deposits that sit atop them. The hard deposits acted like an umbrella, protecting the sandstone below from the eroding effects of rain and wind. What remains today are red and white striped “stems” supporting dark “caps” that look very much like giant mushrooms.

Getting to the Toadstools is easy. They’re located about 45 miles east of Kanab along Highway 89. There is a small parking lot located directly off the highway – spotting its road sign can be tricky. Adjacent to the lot is a small opening in the perimeter fence, which unofficially marks the trailhead. Follow the wash through the shallow canyon three-quarters of a mile to the far back rim. This is where the Toadstools live. 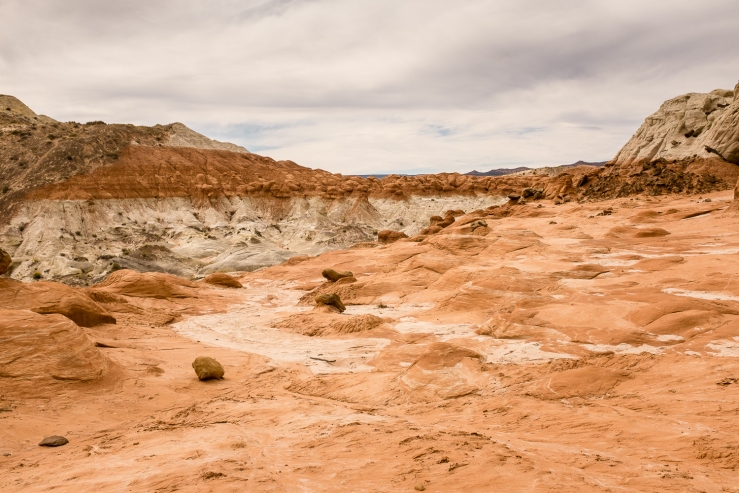 The wind whipped furiously that afternoon, so we suited up, protecting all exposed air holes from the fine particles of sand that would inevitably find their way in. Our first few steps past the fence felt like a space walk on the moon. Sandy wind battered our faces and found its way into our throats and lungs, making them burn.

Once I was able to get to high ground, I could see the surrounding landscape was an endless network of small peaks and ravines built and cut from rock of various shapes, colors and textures. This is the kind of place one could happily wander through for hours, getting herself hopelessly lost until she realizes the road is no more than a mile away. 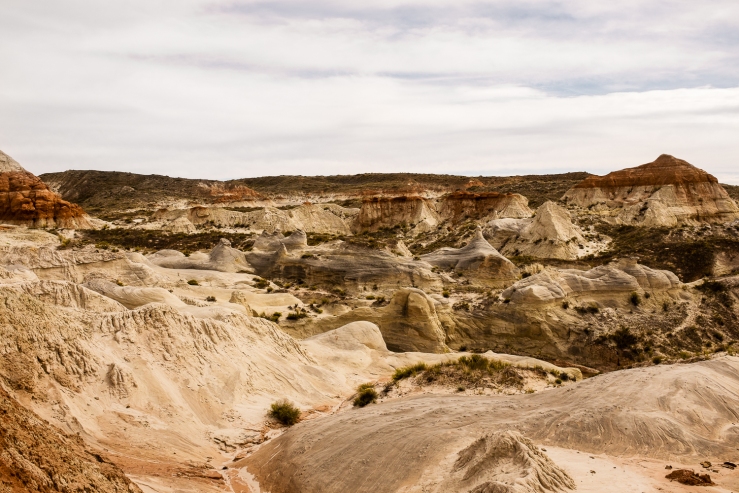 The wash ended at a large collection of boulders and among them, the large, red Toadstool you’re most likely to see in a Google image search. A little further off in the distance was a second collection of smaller Toadstools near the back wall of the canyon. Upon closer inspection, this wall proved to be just as fascinating as the Toadstools. It had numerous coves to duck into along its base.

One “room” had a large, flat rock located directly in the center of it and warm sunlight beamed directly down onto it. A bright green plant flourished despite the arid conditions. The air was still and there was utter silence.

For a single moment, this was the most sacred place on Earth and it belonged entirely to me. Meanwhile, Luke was off discovering these little plants that resemble tiny aliens.

This is just one, tiny portion of a big, vast landscape that is freely available to everyone who cares to break away from The Mighty Five. The next time you find yourself in Utah’s lower third, consider pulling your car over and exploring one of its best kept secrets.