Hidden Valley attracts a lot of attention. Many come to cling to the sides of Joshua Tree’s famous granite formations. Others come to stroll the nature trail that highlights an incredible variety of Mojave Desert plant life. A crazy few come to string up a slack line three stories above the Earth’s surface.

Me? I came for its backstory.

In the early part of the 20th century, this part of California received a lot more rain than it does now and pristine grassland grew inside the protective rock walls of Hidden Valley. Allegedly, this is where a group of Arizona cattle rustlers stashed their stolen herd. The cattle grazed freely, unnoticed by outsiders. This gave the thieves ample time to re-brand and sell them. No one’s quite sure what happened to the men who pulled off such a nefarious deed, but it’s widely believed they died true to character – in a bar brawl.

Later, a rancher named William Keys saw the same grassland and thought it would be a great place for his cattle to graze. To make it easier to get in and out of the valley, he blasted his way through the rock. To this day, visitors use Keys’ portal to access the one-mile nature trail inside of Hidden Valley.

This loop hike is very approachable for most people – old, young, athletic or otherwise. It’s very easy going and very well marked. We spent a majority of our time climbing on boulders, slipping into slot canyons and crawling through keyholes off the main trail. We even found a small oasis in one of its valleys.

Hidden Valley is a very fun and approachable way to see many of Joshua Tree’s highlights – its desert plant life, wildlife, rock formations and climbing community –  in the span of an hour, max. It’s nature’s version of an adult playground. 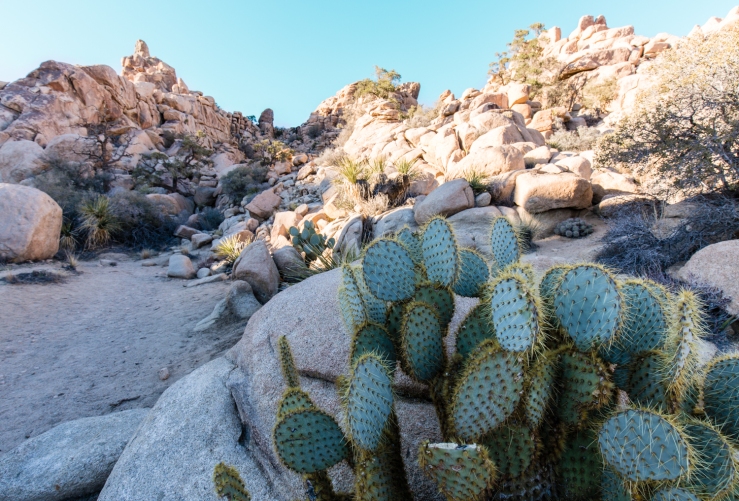