What comes to mind when you hear the word “swamp?” A moss-shrouded, bubbling cesspool? A deep-south swimming hole filled with gators? Swamp ass? Most associations are negative. In reality, a swamp is a diverse wetland habitat consisting of marshes, lakes and streams. Tucked inside the Minnesota Valley National Wildlife Refuge is the Louisville Swamp. This 2,600 acre unit of the refuge contains a variety of habitats not normally associated with swamps, including restored prairie, oak savannah and forest land.

Louisville Swamp is located just 30 miles south of Minneapolis, adjacent to the Renaissance Festival grounds. Yet, it has a surprisingly quiet and isolated vibe. It’s one of those rare places where it’s possible to spend all day getting lost along the unit’s 13 miles of cross country skiing and hiking trails and encounter only a handful of visitors along the way. This is especially true in the winter.

Luke and I visited Louisville Swamp twice to accomplish what we thought we could do in one afternoon: hike to Jabs Farm. Abandoned over 60 years ago by its last inhabitants, the old Jabs Farm site has been left to crumble into beautifully preserved ruins. Normally, the trek is an easy four miles round-trip from the main parking lot located in the unit’s northeast corner. We parked and studied the free map available at the Mazomani Trailhead. It indicated that a portion of the trail known as Floods Run was, in fact, closed due to flooding. We set out to investigate just how closed the trail actually was.

The first part of the Mazomani Trail led us south through a grove of Old Savanna Oak trees. Their naked, twisting branches extended wide from their thick trunks, as if stretching out after shedding the weight of their summer foliage. We followed the trail east along a high ridge overlooking the Louisville Swamp, which would be considered a mid-sized lake under different circumstances. The trail led us down into marshland where tall grasses stood in open water. A thin layer of ice was just starting to form along the surface, but it was not yet thick enough to carry our weight. We backtracked a short distance up the ridge and followed the detour.

We walked for over an hour and a half and had not yet spotted the farm. Upon closer examination of the trail map, we realized the dashed line we thought would lead us directly to Jabs Farm, was actually a land barrier marking a portion of the unit owned by the DNR. From where we stood, the only way to get to the farm was to cut through a quarter mile of dense woodland. Daylight was fading along with our bladder capacity, so we decided to turn back and try again another day.

Our second attempt to reach Jabs Farm came about a month later in December. The temperature had hovered mostly at- or below-freezing for the past few weeks, so we assumed the marsh would be frozen solid. Once again, we set out from the main parking lot along the Mazomani Trail. This time, we were able to successfully cross the frozen marsh. However, we only made it three-quarters of the way there. A rushing river of water stood between us and the farm less than 100 yards away. We were, once again, forced to turn back.

This time, we had plenty of daylight and rationed our water intake before arriving. So we got back into the car and drove to a portion of the Mazomani Trail a few miles south that was guaranteed to be high and dry. We parked along the side of Middle Road in the designated area, cut through a private farm, temporarily trespassed across a set of railroad tracks and picked up the trailhead on the other side of the gate.

A snow-covered trail wove through beautiful marshland. About a half mile in, we approached one of Louisville Swamp’s most notable features: the Glacial Boulder. It’s impossible to miss this dumptruck-sized rock standing alone in a wide-open field. Climbers come here to “boulder” up its vertical sides. It also clearly marks where the Mazomani Trail turns right toward Jabs Farm.

We walked along a ridge through upland forest for approximately 1.5 miles. Suddenly, an open field and three crumbling stone structures appeared before us. 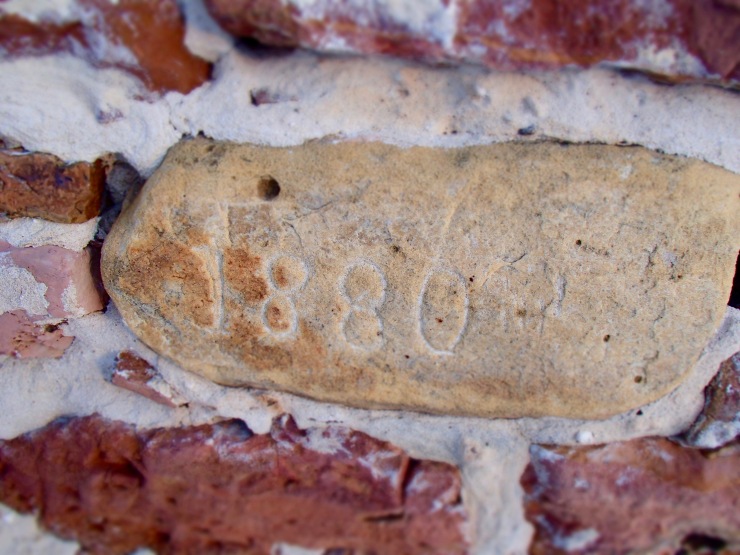 The preserved portion of Jab’s Farm includes a small cottage-turned-chicken coop that now serves as a day shelter for visitors. Its dirt floors and wooden benches provide a nice break from the cold wind. There’s also a granary that is inaccessible, but you can peek inside through the windows. The most impressive structure is the decrepted barn built in 1880. It’s missing a roof and one entire wall, but the details that do remain are beautiful, like the stone marking the year in which it was built.

The setting sun perfectly illuminated the barn’s walls with a warm, golden glow. Luke and I wandered around the property taking pictures and imagining what it was like to live here at the turn of the last century. Clearly, it was a very beautiful, but isolated existence. The sun dipped behind the trees and we started making our way back to the car. Along the way, we crossed paths with an employee heading toward the farm to lock the day shelter.

He was the fourth person we saw all day.