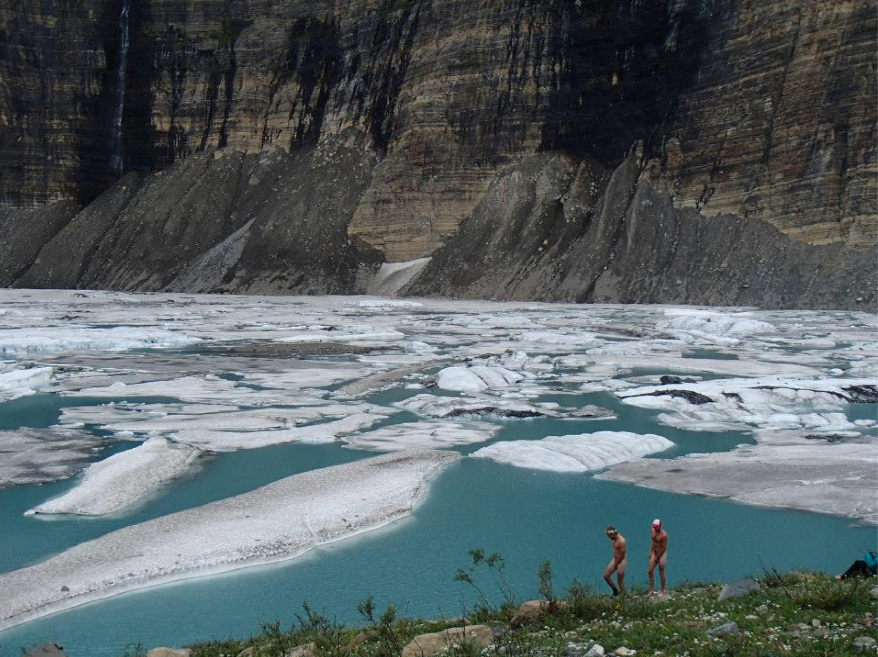 We planned to hike to Cracker Lake, spend the night in the backcountry, and then hike back down the following day. As the day drew closer, the forecast called for heavy rain and near-freezing temps overnight. After our experience at Hidden Lake, we decided to take it easy on ourselves and do a day hike to Grinnell Glacier instead. The hike turned out to be the best experience we had in the park.

We had wide-open views of the mountains, valleys, alpine lakes and waterfalls. We spotted a moose, goats and marmots, and just missed three grizzlies sauntering across the trail. Grinnell Lake became bluer the higher we climbed. After a tough scramble up the last 400 yards of the trail, Grinnell and Salamander Glaciers finally came into view. The scene was both serene and breathtaking. I took a moment to climb down to the shore of the lake that formed at the base of the glaciers and contemplated how lucky I was to be there. It was a very Zen moment until two dudes started taking off their clothes. I thought they were going to jump into the lake, but they simply stood near the shore, junk in hand, and posed for a camera. They announced themselves as “The Naked Nomads” and everyone got a good chuckle out of their prevalent tan lines.

I rejoined Luke who was sitting on some large rocks, enjoying another Cliff Bar lunch. Suddenly, he jumped up and yelled, “HEY!” One of the overly aggressive chipmunks found his way into the front pocket of Luke’s pack, hoping to steal the remainder of his uneaten bar. Luke caught him in the act with his tail protruding from the top of the pocket. He grabbed for his bag and the chipmunk was gone in a flash. What a pro!

On our way back, we stopped every hundred yards or so to take pictures. It was getting later in the day and Luke’s knees were “clapped out,” as he put it, so we decided to bypass the final three miles of the trail by catching one of the boats coming from the St. Mary Hotel. We arrived at the boat launch about 30 minutes before the final depature of the day. Luke went off to take some photos of the lake. I sat down on an old tree root and took in the last glimpse of the glaciers in the distance.

Daniel, a man roughly my age, sat down next to me and struck up a conversation. He told me about his brothers, his parents whom he was hiking with, that he spotted a bear earlier in the day, and that he has Autism. I told him that we hiked all the way to the glacier, that my brother’s name is also Daniel, and that we hadn’t seen any bears on the trip. We continued our friendly and upbeat conversation until the boat arrived and he went to join his parents at the front of the line. Round-trip passengers boarded before one-way passengers, so I hung back on the tree root waiting to be called. A minute later, Daniel came back and handed me a small, smooth rock that was warm from his hand. I thanked him for the gift and zipped it safely into the brain of my pack so I wouldn’t lose it.

I keep that rock in my linen closet, the most chaotic part of our apartment. I’m usually tearing through this closet trying to locate the nail polish remover or an empty GooTube amongst the buckets of junk. When I see that rock, I’m reminded of Daniel, our easy conversation, and his sweet gesture. It chills me out, even when I can’t find the damn lint roller.